The Story of the Marathon 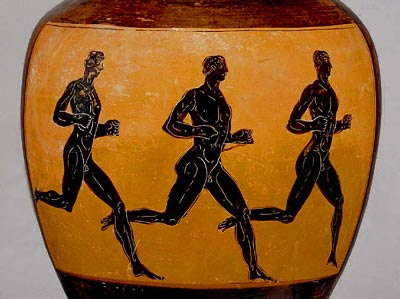 This article appears in the March 2010 issue of Impact magazine; image from here.


This year marks the 2,500th anniversary of the Battle of Marathon, where the legend inspiring today's long-distance endeavour was born.

The marathon is “the acme of athletic heroism,” according to Britain’s Roger Bannister, who first broke the four-minute mile and won Vancouver’s “Miracle Mile” in 1954. The miracle was that two competitors – Bannister and Australia’s John Landy – cracked four minutes in the same race.

By Peter McKenzie-Brown
Experienced marathoners know about the sometime heroism of endurance running. Most do not know, however, that the race which captured the imagination of the world a century ago has been fundamentally shaped by the heroism of four fine athletes: the legendary Pheidippedes, Greek idol Spyridon Louis, Italian champion Dorando Pietri and American iconoclast Bobbi Gibb.

In October the Athens Marathon will celebrate the 2500th anniversary of Pheidippides’ fabled run to Athens as a messenger from the Battle of Marathon. That battle was a turning point in a long series of wars between Greeks and the Persian Empire. The hero of our story is said to have run the marathon distance from the battlefield to Athens non-stop (and without aid stations) and burst into the Assembly crying “We have won!” He then collapsed and died.

Pheidippides’ demise doesn’t make sense until you put his story in context. He was by reputation the fastest runner in the Athenian army. When the generals realized the Persian forces were arriving, they dispatched him to Sparta to ask for immediate assistance against the invaders.

The Spartans were sympathetic, but couldn’t participate right away because of a religious festival, so Pheidippides ran back to rejoin his army – completing a 240-kilometre run in just two days. After a few days’ rest he fought in that decisive battle. Then he ran to Athens to proclaim victory. The running part of this extraordinary sequence totalled nearly 300 kilometres, and then there was the fighting.

Spyridon Louis
During the first modern Olympics in 1896, 17 runners (13 Greeks and four from other countries) ran the first competitive marathon along a course paralleling the one Pheidippides used. Twenty-five runners actually went to the start, but eight dropped out before the pistol fired. Only nine finished the 40-kilometre race, which Spyridon Louis won.

As Louis stopped at an inn toward the end of his run to drink a glass of wine, he could barely have imagined what was in store when he finished. He arrived in a stadium erupting with joy. Two Greek princes accompanied him on his final lap for a finishing time of 2:58:50.

His victory set off wild celebrations. According to the official report of the Games, “Here the Olympic Victor was received with full honour; the King rose from his seat and congratulated him most warmly on his success. Some of the King’s aides-de-camp and several members of the Committee went so far as to kiss and embrace the victor, who finally was carried in triumph to the retiring room under the vaulted entrance. The scene witnessed then inside the Stadium cannot be easily described, and even foreigners were carried away by the general enthusiasm.” When the King asked Louis to name his reward, the Olympic champion requested a donkey-drawn cart for his water-carrying business.

Given the Greek origins of the race, for many this year’s running of the Athens Classic Marathon will be the run of a lifetime. They will be celebrating Pheidippides’ legendary run on essentially the same course on which Spyridon Louis achieved Olympic glory 114 years ago.

First run as a regular marathon in 1972, the Athens Classic is a difficult race, with long uphill stretches for the first 30k. It begins in the town of Marathon, passing a tomb to the Athenian soldiers who died at the Battle of Marathon. From there it traces a path along the coast of the Aegean Sea, then into Athens. It finishes at Panathinaiko Stadium – a site for athletic competitions in ancient times and the place where Louis celebrated his tumultuous victory.

Dorando Pietri
Since those pioneering days, the marathon has become an established global phenomenon. Typically, about 5,000 marathoners compete in the Athens Classic, and it is just one of more than 800 marathons organized annually around the world. How did this occur?

Distance events began gaining popularity before the seminal 1896 Olympics. For example, Hamilton Ontario’s 30k Around the Bay Road Race is the oldest long-distance race in North America. It was first run in 1894 – two years before the first Olympics and three years before Boston, which is the longest continuing marathon. But the road race with the magic allure is the marathon, which is defined by its peculiar length.

During the first 15 years of the modern marathon, the event was run at seven different distances, ranging from the original 40k to a 42.75k race in 1920. The seemingly arbitrary official distance now honoured around the world – 42.195k – commemorates another heroic finish.

This distance was first run during the 1908 Olympics in London. A 25-mile marathon had been planned, but King Edward VII asked to have the race begin near Queen Victoria’s statue at Windsor Castle. In addition, complaints about tram-lines and cobblestones in the final few miles of the course led to a revised distance of 26 miles to the stadium, plus a 385-yard lap of the track. This is the distance each race honours today.

That distance might have been nothing but an eccentric footnote in marathon history if not for the dramatic finish of that fabulous event. The crowd of 7,500 in the stadium, which included Queen Alexandra, watched as Italian champion Dorando Pietri began his final lap going the wrong way around the track. Officials turned him around, and he staggered to the finish line, falling to the ground several times. Of his total time on the course (2:58:46), he spent ten minutes running the short lap in the stadium. Irish-American Johnny Hayes was getting ever closer, and well-intentioned officials helped Pietri up each time he fell. In the end, Pietri was disqualified for accepting assistance, and Hayes was awarded the gold.

This high-drama finish led to marathon fever in much of the world. There were several re-matches between Pietri and Hayes – all of them over the eccentric London distance. Marathons continued to be run at varying distances, however, until 1921. That’s when, in honour of a marathon still considered the “race of the century,” the International Association of Athletic Federations established the official distance at 26 miles 385 yards (42.195k).

Bobbi Gibb
The last formative event in marathon history came in 1966 with Bobbi Gibb’s historic run at Boston. Gibb was not the first woman to run the marathon distance – for example, in Britain Violet Piercy set the first woman’s record with an official time of 3:40:22 on October 3, 1926.

But as the sport developed, marathon’s governing bodies increasingly refused to sanction female competitors. Gibb had tried to register for Boston but “received a curt reply that women were not physiologically able to run such distances and furthermore were not allowed to do so,” she later recalled. “My outrage turned to humor as I thought how many preconceived prejudices would crumble when I trotted right along for twenty-six miles.”

Initially disguised as a man, Gibb ran as a bandit – an unregistered participant. Wearing her brother’s Bermuda shorts and a blue-hooded sweatshirt over a black swim suit, she hid in the crowds near the starting pen. She waited until half the pack had begun and then ran into the fray.

When other runners and spectators realized a woman was in the race, they greeted her with cheers and good humour. As the day heated up and her confidence grew, Gibb discarded her sweatshirt. She maintained a steady pace until the last few miles, when Heartbreak Hill, dehydration, fatigue and blisters took their toll on the uncoached runner. Since running shoes for women were not available, she wore an ill-fitting new pair of boys’ size six running shoes. As the miles wore on, she blistered badly. “Each step sent a searing jolt of pain to my brain….,” she recalled. “My pace dropped off. I set each foot down as if on tacks.”

Gibb ran through extreme pain for the last few miles, finishing the race in 3:21:40 – 126th out of some 450 runners. Although she was greeted by cheering crowds, a burst of media attention, and a congratulatory handshake from the Governor of Massachusetts, she wasn’t invited to the post-race awards celebration. Her accomplishment made newspaper headlines around the world, but the race director denied that she had participated in the Boston Marathon. She had merely “run the same route.”

Gibb unofficially ran Boston in each of the following two years, and she was joined by other women – notably Kathrine Switzer, who in 1967 registered as “K.V. Switzer” and was the first woman to run with a race number. The race director famously tried to rip the number off her, and was flattened by Switzer’s boyfriend.

The fight for gender equality was unstoppable. Women were officially permitted to compete at Boston in 1972, and the women’s marathon became an Olympic event in 1984. On the 30th anniversary of Gibbs’ historic run, the Boston Athletics Association retroactively recognized as champions the unofficial women’s leaders of 1966 through 1971.

Today’s marathon records are the astonishing 2:03:59 of Ethiopia’s Haile Gebrselassie, and 2:15:25 for Britain’s Paula Radcliffe. Those spectacular performances and the hundreds of thousands of others clocked each year owe much to the pioneers of this mass-participation sport – men and women like Bobbi Gibb, Dorando Pietri, Spyridon Louis and, first and foremost, Pheidippides.

The world has changed immeasurably in the last two and a half millennia. Heroism hasn’t.

Posted by Peter McKenzie-Brown at 3:30 pm

This is a very good information about origins and run...I love it!!!

This article poses a good argument as to why the 2011 Boston Marthon times should be recognized by the IAAF. If the Greek soldier, Phidippides had run an out and back course he'd of been killed. Thus the Boston exemplifies the true spirit of the marathon despite the elevation haggling.

His other books include Bitumen: The people, performance and passions behind Alberta's oil sands; Footprints: The Evolution of Land Conservation and Reclamation in Alberta (2016, with Robert Bott and Graham Chandler); Barbecues, Booms and Blogs: Fifty Years of Public Relations in Calgary (2008; co-editor and contributor); The Language Instinct (2012); In Balance: An Account of Alberta’s CA Profession (2000, with Stacy Philips); The Richness of Discovery: Amoco’s First Fifty Years in Canada (1998); and The Great Oil Age: The Petroleum Industry in Canada (1993, with Gordon Jaremko and David Finch.)

Prior to serving as coordinator and an interviewer for the Petroleum History Society’s Oil Sands Oral History Project, he was a recipient of that society’s Lifetime Achievement award. Two of his books - Footprints: The Evolution of Land Conservation and Reclamation in Alberta (with Robert Bott and Graham Chandler) and Bitumen: The People, Performance and Passions behind Alberta's Oil Sands - have received the Society's Book of the Year award.