Iron Will:
The heart and soul of the triathlon’s ultimate challenge

Triathlon began as a sport in California in the early 1970s, but those events involved fairly short distances: Typically, a 1,000-metre swim, a 40-kilometre bike ride followed by a 10-kilometre run.
An Ironman Triathlon is 'way tougher. It consists of 2.4 miles of open-water swimming, 112 miles of cycling and 26.2 miles of running – slightly more than 140 miles in all. The Hawaiian event was the brainchild of Navy commander John Collins who was stationed in that state. First held in 1979 with a handful of contestants, it soon began drawing hundreds. Then, the demand was so great that applicants had to qualify to participate. 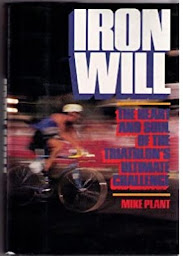 In this book sports writer Mike Plant, who has written other books about triathlon and competed in the race himself, shows vividly how grueling an event the event is. . Some athletes literally crawl to the finish line – a reality which provides for great TV coverage, of course, but he made it grueling on the printed page.
I personally have completed the Ironman 11 times – nine times in Penticton, Canada, and twice in Hawaii, where it all began. I suppose that is at least part of  the reason I find this book so fascinating. The characters are vividly portrayed, and my memories of that crazy period in my life are happy ones. There are the portrayals of many of the well-known characters of that period – especially the men we called the Big Four: Dave Scott, Scott Tinley, Scott Molina and Mark Allen.
I received training from Dave Scott at one time in my life and, by good fortune, he won the event in 1988 when the book was being launched. He autographed my copy of the book, wishing me “health and happiness always. Stay fit.” The author also signed my copy. He wrote, “Congratulations! The finish line is everything. Good racing,” and dated it October 23rd, 1988.
The distances for the Ironman all originated in Hawaii. They combined the Waikiki Roughwater Swim (2.4 miles or 3.9 kilometres), the Around-Oahu Bike Race (115 miles or 185 kilometres, which was originally a two-day event) and the Honolulu Marathon (26.219 miles or 42.195 kilometres). These activities start at 6 am, and must be finished by midnight.
The following is a brief segment from the book, slightly edited, to give a sense of what a terrific read it is.

“On a normal day, the headwinds near Hawi blow steadily at 15 to 25 miles an hour. At the Ironman in 1983 the winds howled through the town at more than twice that – gusts of up to 55 mph were reported, strong enough to stop cyclist’s dead in their tracks, strong enough to blow others right off the road. Some competitors simply got off and walked, and even the strongest were afraid to let go of their handlebars to take water bottles from the aid station near the top.

“The aid station at the turnaround is one of the most exciting on the course because there's always a big crowd of spectators and media people. It's a high point, a big psych, especially after the wind on the hills. Turning to the left, grabbing a pair of water-bottles and perhaps a banana as they go, the triathletes are reasonably sure that for a few miles, at least, the wind will be behind them they fly through this part of the course, spinning their pedals furiously until they run out of gears to push, hunching low over their handlebars, hissing through the warm air in a rush of sparkling chrome and blur of bright colour, moving easily for the first time all day. But that lasts for what seems only a few precious seconds before the wind charts shifting, gusting back and forth. The cyclists are still going fast, but their knuckles are white and in their minds is the thought that if one of those big gusts catches them from the wrong angle, it's going to whip them off the island and into the ocean. The race in ‘83 was the worst in that department, too.

“Finally, at the bottom, with their hearts settled back into their chests, the cyclist take a sharp left turn it, high then climb a short steep Hill and turn right which puts them back on the highway. From there on it's a straight shot back into Kona.

“Or rather, it's a straight, long shot. The race has just begun, actually. With the exhilaration of the turnaround a distant memory, the 50 miles back into town begin to soften and stretch like taffy under the hot sun. The winds, while not as strong as they were up north, are far more frustrating, and the hills have grown bigger somehow than they were on the way out. The triathletes begin to fight not just the cumulative physical effects of the long swim in the hours of hard riding, but also the inevitable impatience to be off the damn bike period to sum, first timers mostly, or fools who have forgotten, the marathon actually starts sounding good 80 or 90 miles into the bike ride. It's a stupid thought. They regret it quickly once that part of the race starts.

“I never thought that, said [Ron] Smith, who has ridden his bike as much as 25,000 miles in a single year of training. He's a good runner with a marathon best of well under 3 hours, but it's never been his strong suit. Looking ahead to the Ironman marathon is, for him, like looking forward to jumping off a building.

“The toughest part of the ride – outside the damn wind – Is knowing that after busting your hump out there for five hours it's going to be 1:30 in the afternoon, you're on asphalt, and God Bless America if you're going to be climbing that stupid Hill and heading back out onto the lava fields again.”

“All good endurance competitors learn that patience is a precious, irreplaceable virtue. About the worst thing for a triathlete to do during the Ironman is to anticipate the end of anything, be at the swim, the bike ride, or the run, or any segment of the three. Pacing and strategy are important, but a certain psychological, is critical. Putting the miles behind you, one mile at a time, is the key. Thinking ahead makes you anxious, eager to be there instead of where you are, and you have to be where you are because there’s little you can do about it except keep pedaling or running. An anxious triathlete, impatient with the pace, thinks the hills should be easier to climb than they are, thinks the bike should weigh less than it feels like it does. Getting mad at the Ironman is never a good idea, but it happens frequently, and the nagging wind often speeds the process along. The final, critical step for a frustrated competitor is pushing too hard too soon – It's as sure a recipe for disaster as any.”

If you can find a copy of this book, give it a read. It might inspire you to put your pandemic time into training - and maybe competing in the 2021 event. This year's, for the first year ever, has been cancelled.

Posted by Peter McKenzie-Brown at 11:39 am