A World in Turmoil 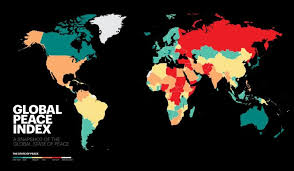 Until the pandemic began, our globe was getting richer, but not becoming a happier place. Indeed, one of the great ironies of those pre-pandemic days was that, despite a growing world economy, turmoil around the planet was rising. Refugee camp numbers were growing rapidly, and would-be migrants used every imaginable tactic to migrate toward the world’s rich economies. This commentary draws widely from the ideas of political scientists – a field of science often confused with the rough-and-tumble of raw politics – to trace the growing turmoil in the world.

The three political scientists I cite begin their commentary with the dismantling of the Berlin Wall and the attendant collapse of the USSR. Think back on those events: After two world wars, communist takeovers in Russia and China and bitter East-versus-West encounters in Korea, Vietnam and other regions, the people of a soon-to-be-united Germany tore down the Berlin Wall.

With those events, the future looked to be one shifting to liberal democracy, everywhere – at least, that was the view of political scientist Francis Fukuyama, who captured these moments of naïve optimism in The End of History and the Last Man. Western liberal democracy would rise after the Cold War and the dissolution of the Soviet Union, he wrote. “The end-point of mankind’s ideological evolution and the universalization of Western liberal democracy as the final form of human government” had begun. Most of his peers quickly rejected this notion.

Based on secularized Christianity, the view that history has a grand purpose for humanity is a classic Western conceit. As British philosopher John Gray pointed out, it is not found in Hinduism, Buddhism, Jainism, Taoism, nor in Greco-Roman antiquity. In those traditions, human history is seen as cyclical, with some version of salvation as the goal. By contrast, such Western secularisms as Marxism, liberal humanism, and global capitalism view history as linear trends which will ultimately lead to salvation.

Political scientist Samuel Huntington countered with The Clash of Civilizations and the Remarking of the World Order. This brave new world would face more, not fewer, conflicts between and among formerly communist powers and major civilizations, he wrote.

To understand the conflicts the world faced, we need to understand culture as the primary source of war. “In the emerging world of ethnic conflict and civilizational clash,” said Huntington, “Western belief in the universality of Western culture suffers three problems: it is false; it is immoral; and it is dangerous.” While peoples and countries with similar cultures would come together, those with different cultures would come apart. “Alignments defined by ideology and superpower relations are giving way to alignments defined by culture and civilization.”

Civilizations in conflict are more intransigent than countries advancing national interest or calculating the balance of power. During the cold war, the major global division was between liberal democracy and Marxism, both of which are Western notions. But when Russia became the core country of a civilization, its distance from the West became difficult to bridge,

As the relative power of the West declined, so did its cultural appeal. Meanwhile, in the dispersed Islamic world and the centralized Chinese state, renewed assertiveness and self-confidence arose. After four centuries of rapid growth in Europe and North America, a more hazardous stage of world history was emerging.

This led Huntington to a set of recommendations anchored in the idea that, unless the West recognizes the power of cultural conflict, it could perish from ignorance, overconfidence and complacency. “The principal responsibility of Western leaders,” he wrote, “is not to attempt to reshape other civilizations in the image of the West, which is beyond their declining power, but to preserve, protect and renew the unique qualities of Western civilization.”

These trends are in play in America’s capitol. There, the present Administration practices unilateralism and contempt for traditional allies, while it romances with traditional rivals. Washington seems to want the benefits of its traditional leadership without the inconvenience of shouldering the burdens they imply. In today’s White House, the gap between ends and means is increasing rapidly.

But America’s problems pale in comparison with those of countries with weaker institutions, less robust economies, and less democratic experience. Take Russia: Its collapse into a communist state led to control by a former KGB agent playing a similar role to those of the Tsars and such political premiers as Stalin.

For the best part of a century, people in the West believed Lenin had created a collectivist state with little resemblance to Marxism. Calling Russia or China a communist state benefitted two groups. Within the States, it conveyed the idea that those with power and wealth were using them for the benefit of all. Outside, it made the US and other countries that break unions to keep labor costs down seem to be doing so for the sake of freedom and not the benefit of those that already have wealth and power. You cannot associate Marxism with Russia’s or China’s government. Doing so is a dog-whistle.

The most recent important recent work in this area, Robert Kaplan’s The Revenge of Geography, carries the subtitle “What the map tells us about coming conflicts and the battle against fate.” It paints raw geography as a critical contributor to global conflict.

Acknowledging that people’s ideas and actions shape history, Kaplan described “constraints imposed by geography and the vast and varied phenomena that emanate from it...everything from persistent…national characteristics to the location of trade routes to the life-or-death requirements for natural resources – oil, water, strategic metals and minerals.”

And what about new technologies? “The advance of electronic communications [only made] the world smaller.” Such new media as the Internet made “geography more precious, more contested, more claustrophobic.”

The science of political science will now have to grapple with how these new technologies affect political structures and decisions. Countries can now influence each other and even wage “war” via the internet. Will that decrease or increase international tensions? Political scientists will do what all scientists do: develop new hypotheses and test them by observing what actually happens. Hopefully, what they learn will help us reduce conflict and improve human rights globally.

Posted by Peter McKenzie-Brown at 1:07 pm