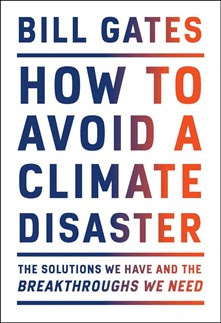 How to Avoid a Climate Disaster: The Solutions We Have and the Breakthroughs We Need
By Bill Gates; 2021

Published just this year, Bill Gates' first solo book couldn’t be more opportune. It emerged during the year that is seeing the costliest weather disasters in history: record global temperatures that have led to horrific forest fires in many parts of the globe, rather strangely partnered with record floods in others. I have been keen on climate change issues since the early 1970s. Also of interest to me is the person of Bill Gates (co-founder of Microsoft Corporation, with the late Paul Allen). Early investors in MS quickly became quite wealthy. For their part, Gates and his wife set up The Bill and Melinda Gates Foundation, which has done many good works throughout the world. Among the super-rich, Gates has had an extraordinary impact on the world.

In the introduction to the book, he sums up his thesis neatly. “There are two numbers you need to know about climate change,” he says. “The first is 51 billion. The other is zero.”

Fifty-one billion is how many tons of greenhouse gases the world typically adds to the atmosphere every year. Although the figure may go up or down a bit from year, it’s generally increasing. This is where we are today.

Zero is what we need to aim for. To stop the warming and avoid the worst effects of climate change – and these effects will be very bad – humans need to stop adding greenhouse gases to the atmosphere.

This sounds difficult, because it will be. The world has never done anything quite this big. Every country will need to change its ways. Virtually every activity in modern life – growing things, making things, getting around from place to place – involves releasing greenhouse gases, and as time goes on, more people will be living this modern lifestyle. That’s good, because it means their lives are getting better. Yet if nothing else changes, the world will keep producing greenhouse gases, climate change will keep getting worse, and the impact on human will in all likelihood be catastrophic.

But “if nothing else changes” is a big If. I believe that things can change. We already have some of the tools we need, and as for those we don’t yet have, everything I’ve learned about climate and technology makes me optimistic that we can invent them, deploy them, and, if we act fast enough, avoid a climate catastrophe.

This book is about what it will take and why I think we can do it.

The global push for a better planet has been remarkable. While talk about climate change has been around since the mid-1800s, it’s only in recent years that people of all ages and socioeconomic levels have contributed their voices to the campaign for a more secure future. Remember Greta Thunberg, the young Swedish activist who has gained prominence for her work to halt climate change and global warming? She rose to fame for organizing the world's first school strike for climate outside Sweden's parliament in August 2018, and gave a speech at the 2019 United Nations Climate Action Summit, berating world leaders for not taking more actions against climate change. Today, the knowledge of the climate crisis is more widespread than ever, together with the understanding that if greenhouse gas emissions keep rising — or even if the numbers remain the same year-on-year – our world will become a flooded inferno faster than we think. And while many climate authors have properly situated this horror as something to run away from, Gates shines a ray of light on something to run toward. His message: we really can get to zero carbon emissions, and for our own good, we must do so within the next 30 years.

From his founding of Microsoft to the work of the Bill and Melinda Foundation’s work in tackling such horrid diseases as polio and malaria, Gates has invested much of his life in the mission to change lives. Much of his work exists within the realm of technology: a firm believer in the power of the applied sciences — and perhaps in his insufficient understanding of the social sciences, he has made such statements as “Show me a problem and I’d look for a technology to fix it” at the same UN Climate Action Summit that Thunberg spoke to. This well-written book gracefully crosses the boundary between scholarly research and creative nonfiction, and Gates makes a strong case for improvements humanity needs. Rather modestly, he says he has worked within the sphere of environmental sustainability for almost two decades, studying, travelling, and consulting with experts in the fields of biology, physics, chemistry, and engineering, among others. In this book, he delivers excellent ideas on the scale of the climate problem, using all the tools in his arsenal — percentages, indexes and charts, for example.

“We already have two of the three things you need to accomplish any major undertaking,” Gates says. “First, we have ambition, thanks to the passion of a growing global movement led by young people who are deeply concerned about climate change. Second, we have big goals for solving the problem as more national and local leaders around the world commit to doing their part. Now we need the third component: a concrete plan to achieve our goals.” On this point, he writes, “I don’t have a solution to the politics of climate change,” and makes no effort in the rest of the book to find one.

As you have probably gathered, I very much enjoyed this book, and there’s a lot more I could say about it. But I will end on his discussion of bovine flatulence – that is, the propensity of herds of cattle to emit methane. After a paragraph in which he describes a “healthy debate” he and Melinda had when discussing the use of the word “fart” in their foundation newsletter, he says “she got me down to one. As the sole author of this book, I have more leeway, and I intend to use it.” He then describes the four parts of a cow’s digestive system, and notes that “in a process called enteric fermentation, bacteria inside the cow’s stomach breakdown the cellulose in the plants, fermenting it and producing methane as a result. The cow belches away most of the methane, although a little comes out the other end as flatulence…. Around the world, there are roughly a billion cattle raised for beef and dairy. The methane they burp and fart out every year as the same warming effect as 2 billion tons of carbon dioxide, accounting for about 4% of all global emissions.”

I learned a lot from this book, and recommend it highly.

Posted by Peter McKenzie-Brown at 11:00 am

My other books include Bitumen: The people, performance and passions behind Alberta's oil sands (2017); Footprints: The Evolution of Land Conservation and Reclamation in Alberta (2016, with Robert Bott and Graham Chandler); Barbecues, Booms and Blogs: Fifty Years of Public Relations in Calgary (2008; co-editor and contributor); In Balance: An Account of Alberta’s CA Profession (2000, with Stacy Philips); The Richness of Discovery: Amoco’s First Fifty Years in Canada (1998); and The Great Oil Age: The Petroleum Industry in Canada (1993, with Gordon Jaremko and David Finch.)