The Golden Buddha and the Man Himself 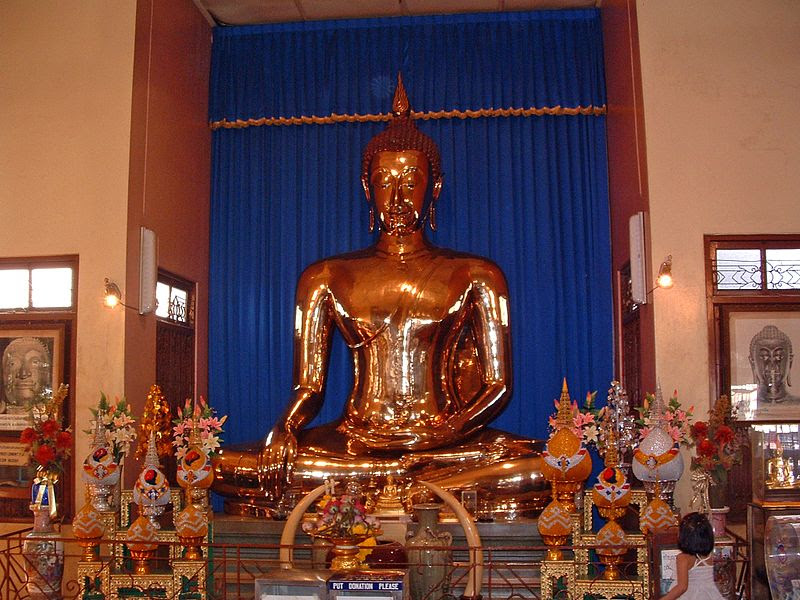 By Peter McKenzie-Brown
One of the great artefacts of Thailand’s past is the Golden Buddha - cast in gold, and now housed in Wat Traimit in Bangkok. The Buddha image originated in Sukothai, the first major Thai kingdom, 700 or more years ago. You can tell the image is from the Sukothai period because the head is egg-shaped: Buddha looks more like an Indian than a present-day Thai.

At some point – probably before the eclipse of Sukhothai at the beginning of the 15th century – the Buddha image was camouflaged with a thick layer of terracotta, which was painted and inlaid with bits of coloured glass.

Many Buddha statues were moved from Sukhothai to Ayutthaya, the capital and namesake of the kingdom that came to dominate Sukhothai. This Buddha apparently made the move in 1403. Ayutthaya's end came when it was conquered by the Burmese in 1767, and the capital city razed. Twenty-five years later, Bangkok was established as the permanent capital of the third great Thai kingdom, and most of the surviving statues were moved there. The Golden Buddha - still coated in terracotta, remember - was housed in a shed with a corrugated iron roof for many years in a rather decrepit wat. Eventually the land was taken over by a cement company.

A new home for the Buddha was constructed in Bangkok’s Chinatown in 1954. As an army of workers moved it slowly toward its new digs pieces of terracotta broke off, revealing that this sculpture – ten feet high, and weighing nearly 5.5 tons – was made of 18-karat gold. The discovery that it was gold came on May 25th 1955 – just short of the year 2500 in the Buddhist calendar, which begins with Buddha’s passing. (According to one version of the story, a piece of heavy equipment dropped the Buddha, and that is when its solid gold substance became known.}

Whatever the case, these events coincided approximately with the 2500th year of the Buddhist era, and many people believed the discovery was therefore a miracle. This lovely gold sculpture is still in its small shelter in Chinatown, with minimal security. I suppose that if you weigh so much, not much security is necessary.

To get an idea of this Buddha’s size, consider the elephant tusks in the foreground of the photo. According to a poorly-translated history available at the temple, the Buddha's dimensions are “6 cubits and 5 inches at the lap span, and 7 cubits and 1 inch high” - roughly 2.75 by 3 metres.

The accidental unveiling of this Buddha as being gold lent support to the highly controversial Ramkhamhaeng stele – a stone tablet from the 14th century that is the foundation-stone of traditional Thai history. Many scholars believe this tablet is a 19th-centruy forgery. However, the fact that the stele mentions large golden Buddhas in Sukhothai (none were known at that time) gives at least some support to its authenticity.

History and Biography: In the Thai tradition, every buddha image is a living object. Thus, it is customary in Thailand to drape their images in the cool season, to keep them warm. A history of a Buddha image like the one above, sketchy though it is, is therefore in a sense a biography of the image. Within that context, here is a brief study of the life of Buddha - the enlightened teacher and the founder of the religion.

The story of Buddha’s birth, life, doctrines and death is a vital part of Thai life. Every Thai child knows at least the outline of Buddha’s story. As in all such stories, it is often difficult to distinguish historical truth from cherished myth, but myth is probably more important. It is myth that people repeat and believe, and it is the teachings often revealed in the myth-telling by which they try to guide their lives.

According to Buddhist tradition and canon, the religion began in the sixth century BCE with the birth of a prince named Siddhartha Gautama near the northern border of today’s India. He was raised amid the wealth and luxury that only a royal family could provide. A prophecy about his future led his father, king Suddhodana, to shield him from knowledge of the pain and suffering so widespread in the world. Gautama grew to manhood and married in innocence.

At the age of 29, however, he witnessed four signs that showed him the true state of the world and changed the course of his entire life. Those signs were an old man, a sick man, a dead man, and a monk – each of them actually a god in disguise, intervening to help Gautama learn about sickness, old age, death and the spiritual quest. Having seen this part of life, Gautama could no longer permit himself to continue his worldly and luxurious life. He resolved to follow the monk’s lead, retiring from the world to seek enlightenment.

He left his family (including wife and child), his wealth and his social rank and became a monk, begging for his food from house to house. He sought teachers, placed himself under the tutelage of famed Brahmans who instructed him in the methods of meditation, and experimented with asceticism.

He felt that having to beg for his food was in itself a hindrance to his ascetic practices and so he set himself progressively stricter practices. First, he limited himself to the fruit which dropped from the very tree under which he sat; then, to a single fruit; then to a single grain of rice; and finally, to a single sesame seed each day. His body became emaciated. “When he touched his stomach, he could almost feel his spine. His hair fell out and his skin became black and withered.” For six years he practiced this austerity, but in the end he concluded that enlightenment was not to be achieved by such extreme measures, and he abandoned them.

After eating a meal of milk and porridge one day, he took his noonday rest in the shade of a grove of trees on a river bank, and in the evening he went to sit under a bodi tree. As he sat in meditation beneath the tree, he resolved not to stir from that spot until he had achieved supreme and absolute wisdom. An evil god known to the Thai as Nara tried to frighten him from his place, but the future Buddha used his power of loving kindness – his compassion – to win a peaceful victory over this interloper.

During the night he successively attained the knowledge of previous existences, the divine eye with which he could see the beings of all 31 planes of existence, and finally the bliss of complete emancipation by which he reached supreme wisdom. This was the moment of supreme of supreme enlightenment. He had become Buddha, an enlightened one. Buddha began preaching sermons, and throughout the rest of his long life he traveled, preached and converted an ever-growing number of followers to his wisdom. In his 80th year, surrounded by loving disciples, he passed away into Nirvana.

Posted by Peter McKenzie-Brown at 7:59 pm