The Decoupling of Oil and Gas Prices 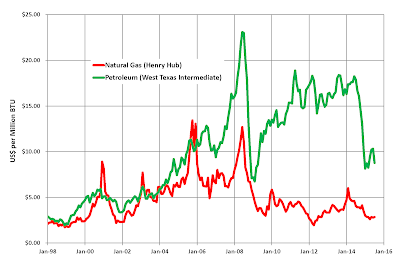 Energy forms are not created equal. Gasoline and diesel are great fuels for transportation, and at the moment there are few viable alternatives. Coal, on the other hand, is just dandy for generating electricity and smelting metals. Natural gas is terrific for space heating, powering electricity-generating turbines and manufacturing fertilizer and petrochemicals. Because of their different applications and their different energy densities, hydrocarbons have different relative prices. And until recently, they were priced in a band which reflected their relative values.

That band is now falling apart. Perhaps this is a sign of things to come - but not before the market experiences what commodity traders call a "short squeeze". The chart shows the price of oil compared to that of natural gas in North America. Until recently, natural gas prices traded in a fairly close ratio to the price of oil. Depending on the state of the industry, the ratios formed a band which ranged from 10:1 to 6:1. Here’s a practical example of how helpful those ratios used to be.

Petroleum industry analysts make their estimates of the future price of petroleum stocks based on their future cash flow – that is, the amount of cash they will have available from production. If they wanted to estimate the future net worth of an oil producer, for example, they would make a knowledgeable assumption about the price of oil in the coming year and an estimate of the company’s total oil production for the coming year. A bit of fifth grade arithmetic then enabled them to estimate the value of that company’s shares. To illustrate, let’s begin with four assumptions:


• First, the company under review will produce a million barrels of oil in the coming year. • Second, the average price of a barrel of oil will be $25. • Third the company’s cost of oil production will be $10 per barrel. • Fourth, the company has 15 million shares outstanding.

Given these assumptions, the company’s cash flow for the coming year would be $15 million, and cash flow per share would be one dollar. To get a good idea of the likely price of the stock in a year's time, we would then ask ourselves whether we thought oil stocks would be in a bull market then or a bear. If we were bearish, we would estimate the price at year end by multiplying that dollar of cash flow by three. If we were bullish, we would multiply it by five. So shares of the company in question would have an implied value of $3-$5. What if the company’s production consisted of natural gas rather than oil?

You can see on the chart that until recently, natural gas prices tracked the price of oil fairly closely – so much so that immutable ratios about the relative value of oil and gas seemed to exist. When gas prices were strong, a gas producer would only have to produce six times as much gas as oil (6,000 cubic feet of gas equals 1 barrel of oil) to be on equal terms with an oil producer. For example, to generate the same cash flow as the little oil producer I just described, in good times a gas producer would only have to produce 6 billion cubic feet of gas a year. If natural gas prices were relatively low, the company would have to produce perhaps ten times as much gas – 10 billion cubic feet per year – to have the same share price as our oil producer.

Eternal Verities: For many years these ratios seemed to be eternal verities for oil and gas producers. Then, last year, the verities fell apart. Oil and gas decoupled. In 2006 gas averaged less than $6, while oil was $65. The 10:1 ratio had been breached. And the situation today? Natural gas on the NYMEX is $7, while oil is $96. That’s a ratio of more than 13 to one. The once seemingly immutable ratios have collapsed, and the gaps are widening. One outcome is that the shares of natural gas producers – especially Canadian gas producers – are in the toilet. The following chart of Rider Resources illustrates the disasters that befell investors in Canadian gas stocks during 2007. What does all this mean? On a continent and in a world facing hydrocarbon-related energy and environmental problems, the cleanest and most efficient form of hydrocarbon energy has become the ugly stepsister compared to its less secure and much dirtier competitor, crude oil. This is not a happy state of affairs – especially since the North American gas industry is in decline.

Forecasters now commonly suggest that Western Canada's conventional gas production has peaked and will continue to decline. In the United States, reserves peaked years ago. The reasons are complex, but the practical reality is that the economics of gas production stink, especially in Canada. The $7 futures contract for gas on the NYMEX isn’t reality here. In Western Canada, our producers get $5-6 per thousand cubic feet for their gas, while the cost of finding and developing the stuff is in the $7-$9 range. Because of the strong Canadian dollar, a less attractive fiscal regime in Alberta, the lack of storage facilities and for other reasons, the Western Canada sedimentary basin is now the most expensive place in North America to find natural gas, and the least profitable in which to develop and produce it. This is the reversal of yet another verity. Until recently, Western Canada’s natural gas hunting grounds were among the most profitable and prolific in North America.

Greenhouse Gases: In a world nearing the crude oil peak, you would expect something like this to happen. The simple, cold logic of economics 101 implies that tightening oil supplies would send price signals which would identify the problem, spur crude oil exploration and make previously marginal resources profitable. The irony, though, is that in North America these events are taking place to a large extent at the expense of natural gas – an energy resource that can be used to fuel vehicles, generate electricity and fire industrial boilers. As we approach Hubbert’s peak, we are neglecting development of one of the few viable alternatives available, and one which, compared to all other hydrocarbons, contributes less per energy unit of the greenhouse gases that appear to be warming our planet. In a world where oil and gas prices have decoupled in this way, it may seem to make economic sense to bail out of gas producers like Rider Resources: Put your money into companies developing pollution-intensive resources like the oil sands. If you subscribe to peak oil theory, and if gas is relatively plentiful while oil isn’t, then the decoupling I described makes sense and is a long-term trend. It also means – and this is a serious environmental problem – that a world desperate for energy will focus investment on oil and coal (environmentally unfriendly) rather than gas (environmentally friendly.)

Medium Term: I believe this is probable over the medium term, at least, because of the growing importance of liquefied natural gas (shipped by boat from plentiful overseas reserves) in world trade. LNG will help keep North American gas prices relatively depressed, since it can be landed in the US for as little as $4-5 per thousand cubic feet. If that trade continues to grow, then the decoupling will continue. However, nothing moves in a straight line, and there is a strong case to be made for rapid upward adjustments in gas prices. Perhaps the ratio of gas and oil prices will soon revert back toward the mean - either because oil prices drop or (in my view more likely) gas prices climb. As the above chart of the natural gas exchange-traded fund (ETF) shows, US natural gas stocks may have just about hit bottom.

From an investment point of view, if natural gas prices are about to rise and you can anticipate when they will begin to make this move. You could make a lot of money by buying companies like Rider Resources (I personally do not own this stock) rather than avoiding them. Evidence that such a situation may be upon us can be found in this chart, which shows net positions in natural gas contracts. The net long positions held by the commercials and small speculators are so extreme that they suggest that a "short squeeze" could be in the offing.

A short squeeze occurs when short sellers start to feel pressure from a rising stock or commodity - natural gas, in this case. Their losses increase as prices move higher. This "squeeze" places pressure on those holding short positions by forcing them to buy back their bearish positions in order to limit their losses. Short squeezes often result in dramatic price gains over relatively small periods of time due to this spike of buying pressure. If that's what's happening here, the commercial buyers (who tend to win over the long term because they better understand the market) and the small speculators seem ready to cream the large speculators. Stay tuned: This could be more fun than the Grand Ole Opry.
Posted by Peter McKenzie-Brown at 7:52 pm