Why are Canadians the World's Energy Pigs? 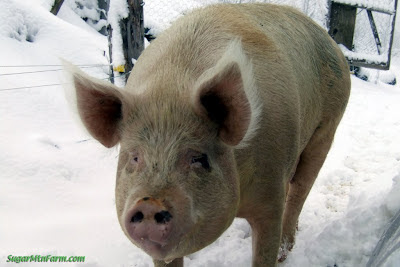 Want to know more about this pig? Click here!

By Peter McKenzie-Brown
Canada is rich, big and cold, and we share two borders with the United States. Those factors explain why we are the world’s energy pigs, but they do not justify it. Only the United States comes close to our per capita annual energy consumption - more than 8,300 kilograms of crude oil equivalent for every Canuck. If that crude oil equivalent were bottled water exported from France, at 2.2 litres per day it would take you ten years to drink it all. However, you would be well hydrated throughout.

Lots of American energy consumption comes from nuclear-fuelled electricity, while Canada’s nuclear industry is proportionately much smaller. That said, 63% of Canada's electricity is hydroelectric - third after Norway (97% hydro) and Iceland (100% hydro and geothermal).

Rich: Unless you are living in Caracas, where subsidized gasoline sells for three cents per litre, you have noticed that gasoline prices are skyrocketing. This concerns us all. Indeed, three quarters of Canadians worry that they will be personally affected by a gasoline shortage in the next five years, but their actions do not seem to match their anguish. Last year, for example, 43 per cent of Canadians reported increasing their consumption of gasoline during the previous three years, compared to 21 per cent who reported lowering it.

Yet during that three-year period, prices nearly doubled. This partly reflects the economic good times of recent years. Many Canadians have seen their personal wealth (think house prices) grow greatly. For many, this has made gasoline price increases – a small part of most household budgets – seem less significant than they would in a recession, say. The relative insignificance of fuel pricing today is one of the main reasons we are less likely to change our driving habits than we did during the last great run-up in gasoline prices - between 1975 and 1980. We have become addicted to gasoline, and that addiction is growing. The fact that we aren’t responsive to higher prices is contributing to the world's energy problems.

Big and cold: Why do Canadians use a lot of energy? For one thing, we live in a large country with a cold climate. We need a lot of gas and heating oil for our homes, to power our economy and to drive long distances.

Winter affects us in not-so-obvious ways. In the winter cold, the fuel efficiency of our vehicles drops. Also, of course, most of us would rather drive than stand at the bus stop in a blizzard, so we avoid the cold by getting in the car. Our driving habits and driving conditions are often fuel-inefficient. Many of us drive big vehicles, including SUVs and trucks, and we own more of them than in the past; the two-car family is the norm. Some of us drive at high speeds. Many of us carry extra weight (golf clubs) in the trunk. And city roads are more likely to be gridlocked during rush hour. All of this wastes fuel.

In addition, we have an increasing dependency on cars. Our vehicles are more fuel-efficient than in the past, but suburban development has created greater distances between home and the places where we work and play. Walking and cycling to work are less likely to be serious options for us than in the past. Suburbs often don’t have easy access to public transit, and the situation is worse in rural areas. So we drive. Nation-wide, only about one adult Canadian in four walks, cycles or takes public transit to work or school. Sixty-one percent of us drive our cars every day.

America’s neighbour: Most Canadians believe we do some things better than the Americans. In particular, we think we have created a more civil society. Illogically, from that starting point we seem to believe we also do better in the matter of energy consumption and management. However, it just ain’t so.

Among the nations of the world, Canada has the greatest appetite for hydrocarbon energy - you know, the types of energy that are getting scarcer and cannot be renewed. Oh, yeah: global warming. In response to the energy crises of the 1970s, Western Europe kept its per capita consumption in check. (See small chart.) So did Japan and Korea, after they became fully developed economies.

For their part, the North Americans were quite a different story. Like the Eveready bunny, our demands for ever more energy have kept going and going and going. In the United States, Americans have shown wizening aversion to high energy taxes. That isn't surprising.

Let’s not forget how much the American economy's 20th century growth was fuelled by its vast energy wealth. Today, of course, energy imports have instead become a major drain on US wealth. Also, there are big differences in distribution of wealth between the US and Canada.

In Canada aboriginal reserves house serious social problems, but there are few pockets of deep poverty in our inner cities. On average, in this country everyone who needs a vehicle can afford one.

That is less true in the US. America's relative wealth gives it greater flexibility in energy. Rather counter-intuitively, the rich can cut their gas consumption more easily than the poor when prices rise. Imagine the schmuck with an old beater – his only car. Compare him to the rich guy who owns a truck, an SUV, a Ferrari and a Toyota sedan. When prices go up, the rich guy drives his Toyota more, saving fuel. The poor guy still drives his un-tuned rattletrap. It’s easier for the rich (read Americans) to save fuel than Canadians. That's reality.

Whatever the reason, successive US governments refused to impose high taxes on fuel in the way most other OECD countries did.Compare the growth rate for hydrocarbon consumption in Canada (chart just above) to that in America (chart 'way above). Population growth was slightly higher in Canada than in the US.

The Canadian disadvantage: Neither did Canada, arguing that increasing energy costs would put the country's industries (many of them energy-intensive, resource extraction operations) at a disadvantage compared to those of its biggest trading partner and competitor. The result? The world’s energy pig got bigger and consumed, in relative terms, more and more non-renewable energy. And it did so as the world made striking advances in energy-efficient technologies, processes and procedures.

Canadian costs and taxes are higher than in the US, but still low relative to Europe. Gasoline in Norway, the Netherlands, Britain and France is more than $6 per US gallon - about twice what we pay in Canada. By comparison, our gasoline prices are cheap. It's Canada's good luck to have the oilsands. They will be supplying the world's energy markets a hundred years from now.

We have other world-class resources - natural resources, of course, but also people and social systems. As a society, we have done many things right. Our schools are rated among the best in the world. We have relatively little crime and a social safety net for the poor and dispossessed. We welcome refugees, and we take pride in our social, cultural and linguistic diversity. We have universal health care and gun control.

Much of our energy consumption goes into mining, forestry and other resource extraction industries. Also, it takes a lot of energy to manufacture light oil from the oilsands and to produce refined products for export to the States. Even so, the disproportionately increasing demand for energy in this country is nothing to be proud of. It is a national disgrace.
Posted by Peter McKenzie-Brown at 9:48 am

I think you missed the boat all together. The oil sands are one of the major producers of CO2. This refined product is then exported to the U.S. for their use We get tagged with using this crude since it shows up in the Canadian CO2 per capita number that you quote.

In actual fact it just a case of poor accounting. Try cutting off the U.S. from this crude and then you will hear the screaming.

Actually the author isn't off the boat. Oil sands production didn't start in earnest until the 1990's. Canada's petro/coal energy consumption has been trending up more or less non stop, mirroring the world trend which has continued up virtually unabated except for one dip in the 70's during the OPEC oil embargo (coal use continued to climb then).

There certainly is truth to the reality that the U.S. benefits from **outsourcing** its CO2 production to raw materials exporting countries such as Canada (oil sands 3 times the CO2 emissions as conventional oil production) and China/Asia (both raw materials but more importantly all those finished goods coming in by the container load... no CO2 on our (north american) balance sheets).

That's the real accounting sham. US/Canadian CO2 emissions when fully accounted for by all the products that we consume are indeed MUCH higher than what are stated.

Please note that hydrocarbons - the word I used in this article - refers to oil, gas and coal energy, not CO2. That said, Michael's comments were quite interesting.