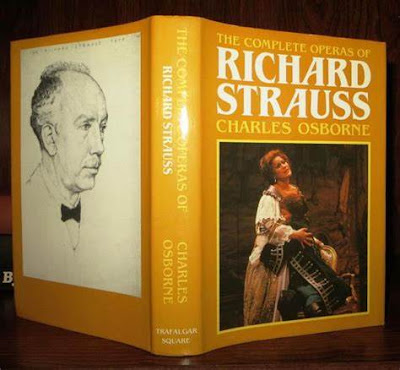 Charles Osborne was one of the most prolific and exceptional commentators on opera  ever.  He was born in 1927 and died three years ago. He was a journalist, a theatre and opera critic, a poet and a novelist. He was the assistant editor of The London Magazine from 1958 until 1966, literature director of the Arts Council of Great Britain from 1971 until 1986, and chief theatre critic of London’s Daily Telegraph from 1986 to 1991. I have read five of his many books: The Complete Operas of Mozart; The Complete Operas of Verdi; The World Theatre of Wagner; The Complete Operas of Wagner; and The Complete Operas of Strauss.
Strauss was a German composer, conductor, pianist, and violinist. A leading composer of the late Romantic and early modern eras, he represents the late flowering of German Romanticism after Wagner. Wagner was a revolutionary in the way he changed the subtleties of orchestration in music, and combined them with advanced harmonics.
If you are not an opera lover, you probably don’t understand the connection between Richard Wagner and Richard Strauss, so let me make it clear. Although essentially self-taught, Wagner was the greatest German opera composer and librettist of all time. Strauss was his intellectual and musical successor, but – unlike Wagner – composed music only. Like other opera composers, Strauss often relied on others to write the libretti for his operas.
Strauss was very talented in several fields. He both composed the music and wrote the libretti for some of his operas – Intermezzo, for example. He also carefully reviewed and helped edit libretti written by others. This worked very well with his first collaborator, Hugo von Hoffmanstahl, an Austrian poet. They would write each other numerous lengthy letters about issues in a libretto but hardly ever met, even though they lived relatively near to each other. They had worked together on six operas together when Hoffmannstahl suddenly died, having written a draft of the libretto for Arabella. Out of respect for his deceased collaborator, Strauss refused to change a word of the libretto.
Strauss, who had a good sense of theatrics, was involved in the staging of his operas, and he was much in demand as a conductor and worked extremely hard conducting music all over the world. This may have been to get a rest from his wife who was a “difficult woman” – a story he brilliantly satirizes in his opera Intermezzo.
Even so, Osborne suggests that we should think of Strauss as Richard the Third, since – given the extent of Wagner’s genius – no German composer of opera could deserve the title Richard the Second….
More than this I cannot say, except that I especially recommend this book if you have an interest in opera. However, I am a bit fanatical about finding errors, and in the case of this book I found a doozy in the first edition hard-bound copy, which a friend of mine lent me. I had forgotten that I already had the paperbound version in my library.
Well, my friends, look at what I found at the end of a chapter on Strauss’s composition of the opera Daphne: “Strauss had a special fondness” for this opera, Osborne wrote. “Perhaps he liked to recall that another Daphne, the very first opera ever composed, by Peri in 1957, was a version of the same legend.” Part of the irony of this story is that Strauss died in 1949, eight years before Peri was supposed to have written the opera!
By the time the paperback came out later in the same year, he had spotted the error and revised the offending text to read that the first opera ever composed, “by Peri in 1597, was Dafne, a version of the same opera.”
Such details aside, in these days of Coronavirus my wife and I have been spending a great deal of our lockdown time watching opera from our collection. This week, we have been watching Wagner and Strauss – Richard the First and Richard the Third – both of whom we have neglected for a few years.
Stay safe, my friends.

I was coordinator and an interviewer for the Petroleum History Society's Oil Sands Oral History Project, which conducted 117 interviews with key people associated with the oil sands, and had each transcribed. For this and other contributions to its work, the society awarded me a Lifetime Achievement Award - only the second person to receive that honour.

British by birth, I am American by upbringing and Canadian by choice. I have compelete the grueling Ironman triathlon eleven times – twice in Hawaii, the other times in Penticton, British Columbia.