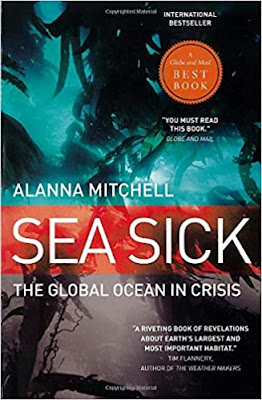 I bought this book when it first came out, but didn’t read it until I found myself in the coronavirus lockdown, some ten years later. The book is terrific, and I have found out that she later turned it into a one-person play, which she performed across Canada and around the world until, I assume, the pandemic began.

A Canadian journalist, author, and playwright, Alanna Mitchell says on her website that she is “fascinated with the intersection of science, art and society.”

She titled this book Sea Sick – not “Seasick,” please note. She writes intelligently and passionately, and travelled around the world to do her research. The book is strongly based on science. “The issue is that all over the world,” she writes, “groups of specialists who rarely put their information together, are finding that global climate change and other human actions are beginning to have a measurable effect on the ocean. The vital signs of this critical medium of life are showing clear signs of distress.”

Mitchell writes about a much greater problem than the well-known idea that oceanic fish and other species are in decline. The ocean, she explains in the prologue, contains some 97 percent of Earth's water, covers more than 70 percent of the planet’s surface, and makes up 99 per cent of our world’s living space. “Even more significant than the ocean’s breadth and width is its depth, or third dimension” she continues. “That total volume, with its immense biological importance, is what I came to think of as the deeps – both the source of life and the future of life on the planet.”

To research this book, she visited the ocean’s threatened areas, where she saw the tragic results of human ignorance and irresponsibility, and talked to scientists who may be able to suggest solutions. Her writing is riveting; her travels, delights; and her findings, intellectually stimulating. Here are a few examples.

Australia’s Great Barrier Reef she calls “The Last Best Place on Earth.”  But the corals that made the reef are dying, she says. “The worldwide decay of coral reefs – caused by the pollution from land, too much fishing, nasty practices to capture wild fish for the aquarium trade and waters that are too hot because of global climate change – has already started to take its toll.”

Another example, closer to home. In the Gulf of Mexico, there are enormous “dead zones” – oxygen-free regions where nothing can live because of the toxic chemical runoff into the delta of the Mississippi River system.

In Plymouth, England, she visited a marine laboratory where a precipitous decline in plankton is being studied, a problem she calls “maybe the most important question human beings will ever grapple with.” Plankton forms the bottom layer of the entire oceanic food pyramid, so anything that happens to plankton affects everything that lives in the ocean. Also, it affects land animals whose diet includes seafood – for example, people on every continent  including, one assumes, research scientists active in Antarctica.

Her book is not only backed up by travels, but by interviews with researchers, and by reference to their work. For example, she cites a 2006 paper titled “Impacts of Biodiversity Loss on Ocean Ecosystem Services” led by two profs at Canada’s Dalhousie University – Boris Worm and Ransom Myers – that is dreadful in its conclusions. According to these researchers, in the half-century since industrial fishing took hold in the world’s oceans, 90 per cent of all oceanic predatory fishes - cod, tuna, swordfish, sharks - were gone. Today, we are fishing the few remaining percentages. Fish farms are today’s answer to the virtual absence of wild fish in the ocean – an absence brought on by overfishing. More than half of the seafood we and our pets consume today – a decade after Mitchell published her book – is the product of aquaculture. Raising saltwater fish takes place in farms in the ocean itself, with species confined  in mesh cages too deep for them to escape, with much of their food being sea creatures that can float or drift on currents through the mesh.

She also went to China, the world’s largest emitter of greenhouse gases, where the waters are polluted – often by the vast pens the Chinese use to raise more farmed fish than any other country. China now provides 62 per cent of the world's farmed fish.

Mitchell’s final trip is to the Florida Keys, the last research expedition of the book, where she had the opportunity to go to the ocean’s bottom in the submersible vessel Johnson Sea Link. When offered the ride, her immediate reaction was, “Why keep going? Why should another research trip make any difference?”

It did, though. As the submersible sits on the bottom, she had a kind of epiphany. “Shivering in my undersea womb, peering at these wondrous, ancient life forms,” she writes, “it occurs to me that we are in an era that holds out the potential of magnificent regeneration. We could, if we wanted to, form a new relationship with our planet. We could become the gentle symbionts we were meant to be instead of the planetary parasites we have unwittingly become.”

In conclusion, I cannot recommend this book too strongly; it dazzles. Mitchell explains the oceanic problems grippingly. Many of her chapters chronicle adventures in which she accompanies scientists at various research missions around the world. At least as importantly, her writing is engaging and balanced. This book rocks.

Posted by Peter McKenzie-Brown at 1:40 pm

Email ThisBlogThis!Share to TwitterShare to FacebookShare to Pinterest
Labels: Books