Book Review and a Comment, Jews, God and History 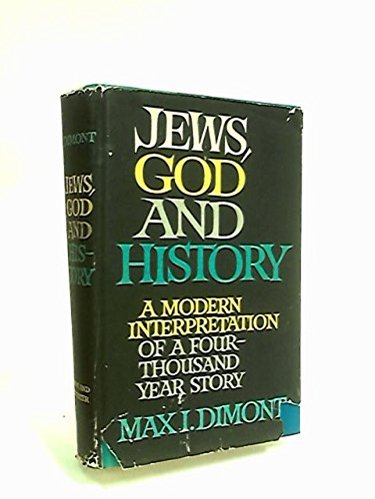 Published in 1962, Simon and Schuster, New York; 421 pages plus extensive bibliography and index. The book has sold some two million copies, in two editions.

My copy is a first edition, which I first read at age 15. Max Isaac Dimont (12 August 1912 – 25 March 1992) was a Finnish-American historian and a practicing Jew whose writings were virtually all about Judaism.

The book covers the history of the Jews from approximately 2,000 BCE until 1962 – roughly four millennia. It follows the story of the Jews from their beginnings as a group of Middle Eastern nomads through their development as a people and the many impacts their religious ideas had on world civilization. For example, the world’s most widely practiced religion today, Christianity, is an offshoot of a Jewish sect that began roughly 2,000 years ago.

Of particular interest to Christians today, perhaps, is that a study of the Dead Sea Scrolls shows how the world’s most widely practiced religion evolved. Before Jesus of Nazareth arrived on the scene, a Jewish sect – the Essenes – had fully developed the ideas that Jesus now represents.

I personally have no religious convictions, but because of my long-standing interest in human history I found this discussion to be of particular interest. In a comparison discussion of the Essene and Christian creeds, Dimont cites A. Dupont-Summer, a professor at the Sorbonne. These comments deserve quoting.

Everything in the Jewish New Covenant heralds and prepares the way for the Christian New Covenant. The Galilean Master, as He is presented to us in the writings of the New Testament, appears in many respects as an astonishing reincarnation of the Teacher of Righteousness. Like the latter, He preached penitence, poverty, humility, love of one’s neighbor, chastity. Like him, He prescribed observance of the law of Moses, the whole Law, but the Law finished and perfected, thanks to His own revelations. Like him, He was the Elect and the Messiah of God, the Messiah Redeemer of the World. Like Him, He was the object of the hostility of the priests, the party of the Sadducees. Like him, He was condemned and put to death. Like him, He pronounced judgment on Jerusalem, which was taken and destroyed by the Romans for having put Him to death. Like him, He founded a church whose adherents fervently awaited His glorious return. In the Christian Church, just as in the Essene Church, the essential rite is the sacred meal, whose ministers are the priests. Here and there, at the heart of each community, there is the overseer, the “bishop.” And the ideal of both Churches, is essentially that of unity, communion in love – even going so far as the sharing of common property.

All these similarities – and here I only touched upon this subject – taken together constitute a very impressive whole. The question at once arises, to which of the two sects, the Jewish or the Christian, does the priority belong? Which of the two was able to influence the other? The reply leaves no room for doubt. The teacher of righteousness died about 65 to 53 BC; Jesus the Nazarene died about 30AD. In every case in which the resemblance compels or invites us to think about borrowing, this was on the part of Christianity. But on the other hand, the appearance of the faith in Jesus – the foundation of the New Church – can scarcely be explained without the real historic activity of a new Prophet, a new Messiah, who has rekindled the flame and concentrated on himself the adoration of men. [Quoted on pages 135-6.}

Later chapters cover a mixed bag of historical events – from the esteem Jews held in many parts of the world because so much of the religion reflects basic morality, such horrors as the ghettoization of the Jews in the modern era to the atrocities carried out by the Nazis in World War II. I find the lead to that chapter, titled “The Brown-Shirted Christ Killers,” both chilling and illuminating. The chapter begins with these paragraphs:

On January 30, 1933, history played a trice on the world and made Adolf Hitler Chancellor of Germany. Jubilant Germans spilled into streets “heiling” the brown-shirted stormtroopers marching in triumph down Unter den Liden, little knowing that in a few short years they would drench the world in blood and go down in history as the barbarian’s barbarians; little suspecting that within one decade they would choke in the sands of the Sahara, drown in the waters of the Atlantic, die on the steppes of Russia, and be crushed in the ruins of their own cities.

From that first day in power to that April day in 1945 when, with Berlin ablaze, Hitler shot himself through the mouth, the Germans exterminated with systematized murder 12 million men, women and children, inn concentration camps, by firing squads, and in in gas chambers. Of these 12 million victims, 7 million were Christians and 5 million were Jews – 1.4 Christians for every Jew. But because the Nazis shouted “Kill the Jews,” the world blinded itself to the murder of Christians.

Hundreds of figures people these pages, many of which most readers will be familiar with. These range from Moses and Jesus of Nazareth to Albert Einstein and Sigmund Freud; from the writers of the Talmud to those who wrote the Old Testament of the Christian Bible.

Dimont’s writing style and passion for his subject make it a pleasure to read (or, in my case, reread) this book. It’s hard to imagine, but the revised version – the one I haven’t read – is probably even better than the first.

When I showed this post to a friend with Jewish family, he told me a story compelling to those of us living in the COVID 19 era. The story goes back to the outbreak of WWII. At that time, when sixty thousand Jews lived in Thessaloniki, Greece. That vibrant community was dynamic, and strongly influenced by the Jewish community. For example, the port of Thessaloniki was closed on Saturday, because it was Shabbat (the sabbath) which requires “strict adherence as a day of prayer.”

It was in this glorious community that the Nazi terror brutally arose. Hitler took Greece by storm to secure his southern wing before launching Operation Barbarossa and the offensive against Russia. Out of the 60,000 Jews in Thessaloniki, about 50,000 were exterminated in Birkenau. The small number of survivors included the Bourla family who in 1961 had a son named him Israel-Abraham (Albert).

Albert studied veterinary medicine, receiving his doctorate in reproductive biotechnology from Thessaloniki’s Aristotle University. At age 34 he moved to the United States where he integrated into the medical industry. He soon joined Pfizer company, where he became head of global vaccines. In 2019, he became Pfizer’s CEO, and led the company's efforts to find a COVID 19 vaccine – the vaccine which is already saving the lives of millions around the world.

Put another way, 75 years after the Nazis murdered so many in the port that was his family’s home, Dr. Bourla is leading humankind’s race to save millions. Yet the antisemitism goes on. As Pfizer was leading the world in its pandemic response, according to a Jewish newspaper,  tropes about Bourla’s Jewish heritage were widespread in Greece. One Greek paper, for example, “claimed that Bourla is evil and the vaccine that Pfizer is working on is actually deadly.” According to this online trope, “Albert Bourla wants to ‘stick the needle, into Greeks, delivering what the paper described as ‘poison’ in the guise of a vaccine.”

In what must become a better world, among some madcap groups the beat goes on.

Posted by Peter McKenzie-Brown at 11:08 am