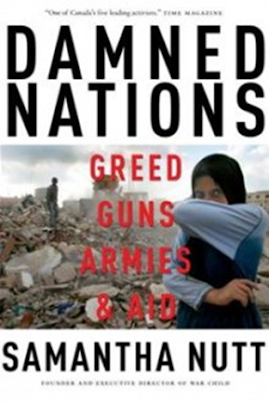 A Rotarian at the time, in 2011 I went to a regional conference in Canmore, and bought this newly published book at a reception after hearing the author give a powerful presentation on the book’s main themes. She dedicated the copy to my wife Bernie, and signed it “Sam.” Then it sat for a decade in a bookshelf, unread, until I decided to review it for this club meeting.

A resident of Toronto, Dr. Nutt is a distinguished relief worker – a public-health physician who worked in many of the most hellish places on Earth from Somalia, Congo and Liberia to Iraq and Afghanistan. She is also one of the founders of War Child, an international charity that dedicates itself to rights and opportunities for children living in conflict zones. For me, an important feature of this book is its Canadian content.

In an author’s note at the beginning of this short tome, Dr. Nutt writes that “the stories contained within this book span nearly two decades of my work with war-torn communities around the world. During this time, I have been privileged to meet extraordinary individuals whose courage and compassion transcend any attempt on my part to introduce them to you in these pages. But I have tried to honour their legacy by providing a narrative platform through which they might speak directly to you and hopefully inspire you, as they did me…. Where the details have faded, I have written the dialogue as I remember it to give you a sense of the overall content and tone of the conversation – and the impression it made.”

She succeeds brilliantly: This book is touching, riveting and powerful. The author has a great sense of humour. For example, she refers to her home as the Nutthouse…. That said, there isn’t a lot in this book to laugh about. Damned Nations covers two themes. One describes her experiences in the field. There she writes particularly movingly of Somalia, for example, which “had the most permanent, psychically shattering effect on me.”

Dr. Nutt also writes in detail about the virtues and vices of international non-governmental organizations (NGOs) from rich countries working in the war zones of Africa, South America, and parts of Asia. Part of her argument is that, while most international NGOs are sincerely, passionately, and successfully committed to reducing poverty and human suffering, in some ways they reflect the privatization of what should be government functions.

Local militias and corrupt tyrants in the global south are to blame for the war, slaughter, and refugee flight that they visit on their own countries, of course. However, arms shipments from companies in the global north allow these wars to reach the high levels of horror which she describes in many chapters. She stresses that Canada is one of the rich world’s major arms exporters to the developing world, and thus part of the poor world’s problem.

My bottom line? This book is well worth reading.

Posted by Peter McKenzie-Brown at 11:01 am