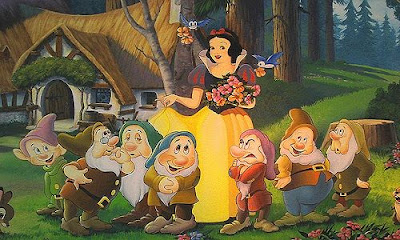 I once shared a class of graduate students with a feminist colleague who contended that the heroine's father was always absent in the early Disney cartoons.

We were studying Snow White and the Seven Dwarfs in that class, and the students (they were all Thai) had to write a brief argumentative essay based on the cartoon. To help them along, I wrote the following as a model. It addressed the question of the presence or absence of Snow White's father in this 1939 classic.

Many commentators have observed that both of Snow White’s parents are absent from Walt Disney’s classic feature-length cartoon, “Snow White and the Seven Dwarfs.” There is no denying that Snow White’s biological mother is absent. The film explains clearly that the poor woman is dead; it is Snow White’s stepmother (not her real mother) who plays the wicked antagonist. However, this paper argues that Father is indeed present, and that he plays key roles throughout most of the film. The children for whom this marvellous fantasy was created will easily recognize Father’s character being performed through the antics and deeds of the seven dwarfs.

Think of this film as an 83-minute metaphor for a family dispute seen through the prism of a young girl’s imagination. The action takes place through three dramatic triangles.

In the opening scene the three points of the triangle are the Queen, Snow White and the Prince. The Queen envies Snow White’s youth and beauty, and Snow White’s gathering affection for the Prince.

In one dramatic highlight, we see the Queen, furious with envy and jealousy, angrily pulling the drapes in her castle room shut when she sees Snow White and the Prince falling in love.

Another dramatic triangle occurs in the middle section of the film. Here the dynamic tension occurs among Snow White, the Old Hag (the transformed Queen), and the seven dwarfs. One dramatic highlight in this segment occurs when the dwarfs suddenly become Snow White’s protector, an important role for father in every culture and society. This process begins when Sleepy exclaims, “Maybe the old Queen has got Snow White!” “We have got to save her!” cries Doc.

The concluding dramatic triangle consists of Snow White, the dwarfs and the Prince. In the form of the dwarfs, Father blesses Snow White’s marriage to the Prince, and the couple ride happily off to their castle together. If we think of the dwarfs as an embodiment of Father, the final scene resonates with even greater strength. A young girl whose first love was spurned by her stepmother seeks refuge in Father, and he blesses her marriage to the Prince.

Seen in this way, the film is an inspired rendering of a domestic theme that is commonplace around the world.

I suggest that the dwarfs embody Father in the same metaphoric way that, in the second dramatic triangle, the Old Hag embodies a transformation of the Queen. As Father, the dwarfs are much older than Snow White, and they are not sexually threatening. And like every child’s father, the dwarfs have many moods. The “Doc” in dad is intelligent and kind. However, Father can also be grumpy or happy, sleepy or sneezy, bashful or even dopey. In my view, the dwarfs in this film are not father figures, as Jenny Sharpe has suggested. They are an image of Father himself, with whom childish viewers will easily identify.

Posted by Peter McKenzie-Brown at 3:23 am