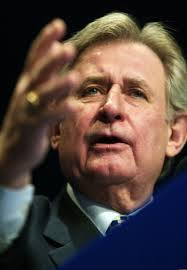 This article appears in the June issue of Oilsands Review

By Peter McKenzie-Brown
Former Premier Ralph Klein’s death at the end of March was greeted quite differently from that of Peter Lougheed, who had also been premier and had died six months earlier. Lougheed was seen as an elder statesman, and his passing was mourned across Canada. The mourning that followed Klein’s death – caused by a rare lung disease, and complicated by an uncommon early-onset dementia – was shorter in duration and more provincial in scope.

It seemed as though everyone in Alberta had a great “Ralph story” to tell, and as often as not people would refer to him affectionately as Ralph or, reflecting his political style, sometimes King Ralph. A man celebrated for his common touch who on occasion tearfully acknowledged that he drank too much, he was well known at favourite watering holes like the bar at the run-down King Edward Hotel in Calgary. He was a political fixture in Alberta for a quarter century, beginning with his election as the mayor of Calgary in 1980. His illnesses prevented him from experiencing much retirement; they were diagnosed soon after he left office. Klein was 70 years of age.

Klein was not a good planner or a gifted thinker. However, during his term he was endowed with good luck – especially in respect to the oilsands.  Three of Alberta’s 14 premiers have played major roles in oilsands development. The other two were Ernest Manning (1943-68) and Peter Lougheed (1971-1985). On Premier Klein’s watch (1992-2006), however, the industry grew into an economic giant. One reason is that government and the oilsands industry prepared for growth. The other is that during the reign of King Ralph, as he was also known, oil and gas prices tripled.

The early part of the Klein era was just awful for Canada’s petroleum industry in general and the oilsands business in particular. Shortly after Klein took office both the federal and Alberta governments withdrew financial support from the OSLO oil sands plant, which would have relied on loan guarantees and tax and royalty concessions to become profitable. Klein famously described his government as being “out of the business of business” – an early indicator of what the Klein era would look like.

The Surge
When he took over from Premier Don Getty, Klein inherited “a bloated bureaucracy and an angry electorate,” as one commentator put it.. Alberta faced large and growing deficits and was desperate for a more balanced budget. Desperate for more jobs across Canada, Prime Minister Jean Chretien (1993-2003) had just handily won an election in Ottawa. The major plank in his election platform? Economic opportunity. Oil prices were in the tank and the industry was desperate for investment opportunities.

Thus was the stage set for the industry’s great surge forward.

Klein had barely moved into his new office when the Edmonton-based Alberta Chamber of Resources formed a Task Force on National Oil Sands Strategies in 1993. Eighteen months later the multi-stakeholder task force issued a report titled “The Oil Sands: A New Energy Vision for Canada.” In clear and compelling prose, the report outlined eight areas where players in the emerging oil sands industry could help the industry grow – by developing new markets and more, for example, a pipeline system that better served areas where bitumen was being produced.

However, the key to growth was a better fiscal regime. According to the task force, “The Federal and Alberta governments…should develop a generic set of harmonized tax and royalty measures based on economic profits. Such a system will provide a consistent fiscal framework for all oil sands projects and result in a balanced sharing of profits. These common fiscal terms are necessary for the future development of Canada’s oil sands.”

After the release of the task force report, Klein’s government immediately began looking for ways to implement its suggestions, and in September approved a generic oilsands royalty and tax regime that would apply to all new projects. New projects would pay the province a 1% royalty on production until net project revenue had paid out all start-up costs. At that point, the royalty would rise to 25%, although all capital costs, including operating, research and development, were fully deductible in the year they were incurred. This was radical, and the free-market Klein government deserves credit for stepping up to the plate without hesitation.

Historian William Wylie once described how the key players in the oilsands have changed over time. “The federal government was the principal actor between 1875 and 1918,” he said, “at first from a sense of responsibility for regional development, and near the end of the period from strategic considerations.”

In the 1920s, though, “the government of Alberta became the major force, in part in order to assert its claim to control provincial resources. In the 1930s, two private companies showed signs of promise and the two governments pulled back in deference to private development and in order to cut costs. The 1940s were years of increased involvement on the part of both levels of government due partially to strategic considerations, and to the power struggle between them. In the 1950s, the conventional oil boom in the province took attention away from the oil sands and delayed their development until the 60s and 70s when the long run decline of the conventional reserves was finally anticipated. When commercial development occurred, private industry was the major agency, but with considerable governmental backing as well.”

Then, the industry morphed into another phase. In 1992 the industry began to enter a new era of oil sands policy – one that is now two decades in duration. Call it the Klein legacy; it is a period in which financial responsibility for oil sands development lies entirely with the private sector. It has already been the longest-lasting of the major periods of oilsands policy, and in the near future seems unlikely to change.

What has made this new era so solid is that during the Klein era conventional oil prices rose from about $19 when he began his term to $63.43 on the day he retired. Gas prices also more than tripled, from $2 to $7. To a large extent driven by the US-led invasion of Iraq, these surges pulled bitumen prices along.

The outcome was a flood of oilsands spending in the province. Suncor began a series of mining and in situ expansions that made it Canada’s largest petroleum company. Syncrude also announced large expansions. Both companies introduced technologies and operations that led to huge reductions in the cost of production.

In 1999, a Shell-led consortium began its Muskeg River Mine oilsands development – better known as the Athabasca Oil Sands Project. The project went on stream in 2003. Construction of Canadian Natural Resources Limited’s Horizon project began toward the end of Klein’s term, with the first phase completed in 2009.

The Klein Legacy…
Oddly enough, as he completed his term as one of the most popular premiers in Alberta’s history, Klein held a news conference in which he essentially proclaimed himself a failure. On the matter of oilsands development, he was partly responding to general criticism by Peter Lougheed, who had called for more limited oilsands development. “What’s the hurry?” Lougheed had asked. He was concerned about the environmental and social impacts of oilsands development. “Why not build one plant at a time? I hope the new government in Alberta will reassess this and come to the conclusion that the mess, and I call it a mess, that is Fort McMurray and the tar sands will be revisited.”

In his sometimes tearful farewell, Klein said he couldn’t have imagined how forcefully the industry would respond to the royalty and tax changes of the mid-1990s. Thus, his government didn’t have a plan for how to deal with the spectacular growth that followed. Of course, any other premier would have basked in the glow of leaving behind an economic boom.

That Klein didn’t have a plan more or less characterizes the man himself. According to one biographer, his government was anything but ideological. It tended “to act first and think later, impulsively adopting elements of the neo-conservative agenda without having an overall strategy.”

Maybe that’s the best we can say about the man most Albertans still think of as Ralph. He was not a planner, but a pragmatist and an instinctive free-market conservative who happened to be in the right place at the right time – just as the oilsands sector reached maturity.
Posted by Peter McKenzie-Brown at 10:21 am