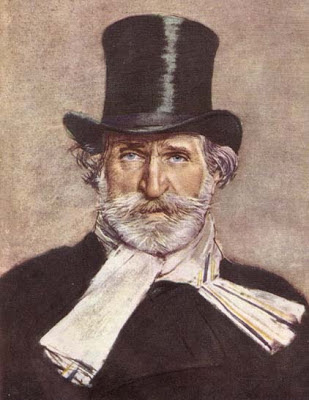 To commemorate his bicentennial, a brief biography of Verdi, the greatest Italian composer; for comment on Verdi and Wagner, please click here

More in this blog on opera:

A Commentary on Handel’s opera Julius Caesar (Giulio Cesare)
Opera, anyone?
The Parallel Lives of Verdi and Wagner
The Tristan Chord
Verdi: A Towering Genius

By Peter McKenzie-Brown
A towering figure in his art, Giuseppe Verdi (9th or 10th of October 1813 – 27 January 1901) is often seen as an extraordinary genius whose operatic dominance is inexplicable. To the contrary: he was the greatest composer of a single generation of Italian opera composers who helped inspire each other’s work.

The others – Gioachino Rossini (1792-1868), Gaetano Donizetti (1797-1848) and Vincenzo Bellini (1801-1834) – each contributed to the florescence of Italy’s greatest century of opera. They were the main players in a style of opera known as “bel canto” (beautiful singing), which fell into a rut: star-crossed lovers and death  before a large and horrified chorus in the final scene.

As a child Verdi was a musical prodigy, and his family fervently hoped he would become the organist in the local cathedral. However, after receiving musical training in Milan, his talent became known. As an adult, he transformed Italian opera.

Verdi had a great love for the works of Shakespeare, and turned Macbeth, Othello and The Merry Wives of Windsor into operas. He unsuccessfully sought a libretto that would do justice to King Lear.

Most scholars consider Otello (completed when he was 74) to be his finest dramatic work. Composed six years later, Falstaff (based on the Merry Wives) is a comedic masterpiece. There is a story behind this: Verdi had been commissioned to write a comic opera (Un giorno di regno) as a young man, but during the period he was composing, his two children (both toddlers) died. Then his young wife died. Half a century elapsed before he was again willing to turn his hand to comedy. Thus, most of his operas were tragedies.

Prior to Verdi, opera focused on aristocratic or classical subjects. By contrast, Verdi’s works focused on people his audience could relate to. His themes sometimes shocked – for example, La traviata (“The fallen woman”), was certainly influenced by Giuseppina Strepponi – his brilliant and talented mistress and second wife. One of her biographers calls her “a traviata who does not die of consumption but…is redeemed and lives on to the mature age of eighty-two.”

It is not possible to appreciate the life of Verdi without understanding the politics of the day. Verdi was born during the Napoleonic wars, in a segment of northwestern Italy that was briefly part of France. Although in 1814-15 the Congress of Vienna reestablished Austrian rule in Italy, in 1830 there were popular uprisings against this state of affairs. Although repressed by the Imperial power, nationalism remained a latent force.

In his first successful opera, Nabucco, Verdi found a clever way to get around the official censors, who had the authority to demand changes to themes, characters and plot. The 1841 opera uses the biblical story of Nebuchadnezzar, and its best-known number is “Va, pensiero” (often called the Chorus of the Hebrew Slaves). Opera-goers associated their own plight with that of the slaves, and the work was a great success. Ever since, Verdi’s music has been associated with Italian nationalism.

The year 1848 saw political upheavals throughout Europe – the most widespread revolutionary wave in European history. Although most of the uprisings were put down, Sardinia-Piedmont became (and remained) an independent state. This was an important victory for Italian nationalism, and the country achieved independence (by plebiscite) in 1860.

Verdi wrote at least one opera per year after Nabucco and then, exhausted, tried to put down his pen by retiring  to his country estate. His best-known works from that period include Luisa Miller, Rigoletto, Il trovatore, La traviata, Les vêpres siciliennes (Sicilian Vespers, with a French libretto). He wasn’t successful in ending his career, however, and for that his admirers have much to be grateful. In addition to the two late masterpieces mention above, he completed Aida in 1871 and revised Simon Boccanegra ten years later.

Two hundred thousand people lined the streets when his funeral cortege moved down the streets of Milan. He was certainly the greatest and most popular Italian of the nineteenth century.

Posted by Peter McKenzie-Brown at 8:22 am