A Commentary on Giulio Cesare, an Italian opera 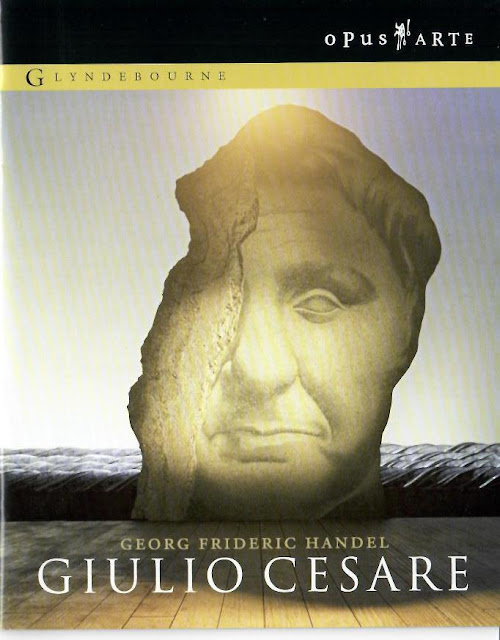 A Commentary on Handel’s opera

More in this blog on opera:

Opera,anyone?
The Parallel Lives of Verdi and Wagner
The Tristan Chord
Verdi: A Towering Genius

Though Georg Frideric Handel wove threads into the tale that are more operatic than historic, this opera recounts one of history’s great love stories. The libretto evolved over half a century. It’s in Italian, and Handel did not have his production performance ready for the King’s Theater in London until 1724. In the balance of these comments I have spelled the names of the better-known characters as we learned them from Shakespeare’s Antony and Cleopatra and Julius Caesar. If opera isn’t your thing, George Bernard Shaw’s Caesar and Cleopatra is a delightful comedy. A recent version is available on DVD, while various people have posted the 1945 production on YouTube.
These comments, however, are about a recent version of a Baroque opera: Handel’s Giulio Cesare.
Conceived by David McVicar, this production of the opera was first performed at the formidably aristocratic Glyndebourne opera house near the southern coast of the UK, close to Brighton. This modernization of Handel’s most popular opera puts the action in the early 20th century, as Britain was adding Egypt to its global empire. So the staging includes typewriters and telephones, to begin with. Later on there are tanks and, by the end, early 20th century warships off the Egyptian coast.
Although the opera setting reflects a period long after Handel wrote this work, the Orchestra of the Age of Enlightenment plays the music with period instruments from Handel’s time.

Who’s Who in the Zoo: The action takes place in Egypt’s Nile Valley, to which Caesar has tracked the defeated Pompey. The characters are Roman and Egyptian. Except for some choruses of red-coated British soldiers, the voices are all in high registers.
There are five Romans. Caesar, played by mezzo-soprano Sarah Connolly, is the Roman General. Cornelia is the wife of Pompey, whom Caesar has just defeated in battle. Sesto (Angelika Kirkschlager) is Cornelia’s and Pompey’s son.
Pompey only appears in the action as a disembodied head. This is because the turncoat Achilla (played by Christopher Maltman,) begins the play as leader of the Egyptian army. Having turned on his own army, he puts Pompey’s head in a casket and presents it to Caesar. To Achilla’s astonishment, Caesar is furious with this cruel and mindless gesture. Alexander Ashworth plays Curio, a Roman official.
The Egyptians are four. Cleopatra is the Queen. Tolomeos, her brother, is the King and sings the role in falsetto. Achilla, whom we have already met, is head of the Egyptian army and counselor to Tolomeos. Nireno is confidante to both King and Queen.
In brief, the story is as follows. In pursuit of his enemy Pompey, Caesar has followed him to Egypt. Pompey’s wife Cornelia pleads with Caesar to spare her husband. He is about to grant her plea, when the Egyptians, led by their boy king Tolomeos, bring him the head of Pompey. Cornelia and Pompey’s son Sesto vow to avenge his death. For her part, Cleopatra wants to depose her brother, thereby becoming the sole ruler of Egypt. She joins Cornelia and Sesto in their plans for vengeance and asks Caesar for help.  Following her overtures, Caesar falls in love with Cleopatra.
Not knowing that his attempt to assassinate Caesar was unsuccessful, Tolomeos takes Cleopatra captive. Sesto kills Tolomeos because he had raped his mother Cornelia. Caesar makes Cleopatra Queen of Egypt and returns to Rome. To sum up, McVicar’s production of Handel’s Caesar and Cleopatra tale is witty, sexy and tragic.
A lyric soprano, the Australian-born Danielle de Niese is brilliant beyond imagination. Her performance in this opera Cleopatra catapulted her to stardom. One of the interesting features of this opera is that the main roles are sung in high registers.

Act 1
After the overture, the entire cast, except Giulio Casare (Caesar), gathers on stage for the opening chorus. Caesar and his victorious troops arrive on the banks of the River Nile after defeating Pompey’s forces. Pompey’s second wife, Cornelia, begs for mercy for her husband’s life. Caesar agrees, but on the condition that Pompey must see him in person. Achilla, the leader of the Egyptian army, presents Caesar with a casket containing Pompey’s head. It is a token of support from Tolomeos, the co-ruler of Egypt (together with Cleopatra, his sister). Cornelia faints, and Caesar is furious about Tolomeos’ cruelty. Caesar’s assistant, Curio, offers to avenge Cornelia, hoping that she will fall for him and marry him.
Cornelia rejects the offer in grief, saying that another death would not relieve her pain. Sesto, son of Cornelia and Pompey, swears to take revenge for his father’s death. Cleopatra decides to use her charm to seduce Caesar. Achilla brings the news to Tolomeos that Caesar was furious over the murder of Pompey. Tolomeos swears to kill Caesar to protect his rule of the kingdom. Cleopatra (in disguise) goes to meet Caesar in his camp hoping that he will support her as the queen of Egypt. Caesar is amazed by her beauty. Nireno notes that the seduction was successful. Meanwhile, Cornelia continues to mourn the loss of her husband. Cornelia prepares to kill Tolomeos to avenge Pompey’s death, but is stopped by Sesto, who promises to do it instead. Caesar, Cornelia and Sesto go to the Egyptian palace to meet Tolomeos.
Cleopatra now believes that as she has turned Caesar, Cornelia and Sesto against Tolomeos successfully, the scales are tipped in her favour. Caesar meets Tolomeos, who offers him a room in the royal apartments, though Caesar tells Curio that he expects Tolomeos to betray him. Tolomeos is fascinated by Cornelia’s beauty but has promised Achilla that he could have her. Sesto attempts to challenge Tolomeos, but is unsuccessful. When Cornelia rejects Achilla, he orders the soldiers to arrest Sesto.

Act 2
In Cleopatra’s palace, while in disguise as "Lidia", she uses her charms to seduce Caesar. She sings praises of Cupid’s darts and Caesar is delighted. Caesar is smitten with Cleopatra, and Nireno tells Caesar that "Lidia" is waiting for him.
In Tolomeos’ palace, Cornelia laments her fate. Achilla pleads with Cornelia to accept him, but she rejects him. When he leaves, Tolomeos also tries to win her, but is also rejected. Thinking that there is no hope, Cornelia tries to take her own life, but is stopped by Sesto, who is escorted by Nireno. Nireno reveals the bad news that Tolomeos has given orders for Cornelia to be sent to his harem. However, Nireno also comes up with a plan to sneak Sesto into the harem together with Cornelia, so Sesto can kill Tolomeos when he is alone and unarmed. Sesto enters the garden of the palace, wishing to fight Tolomeos for killing his father.
Meanwhile, Cleopatra waits for Caesar to arrive in her palace. Still smitten with her, Caesar arrives in Cleopatra’s palace. However, Curio suddenly bursts in and warns Caesar that he has been betrayed, and enemies are approaching Caesar’s chambers and chanting "Death to Caesar". Cleopatra reveals her identity and after hearing the enemies heading for them, asks Caesar to flee, but he decides to fight. Cleopatra, having fallen in love with Caesar, begs the gods to bless him.
At home in his palace, Tolomeos prepares to enter his harem, but then tries to seduce Cornelia. Sesto rushes in to kill Tolomeos, but is stopped by Achilla. Achilla announces that Caesar (in the attempt to run from soldiers) has jumped from the palace window and died. Achilla asks again for Cornelia’s hand in marriage but is turned down by Tolomeos. Furious, Achilla leaves. Sesto feels devastated and attempts to kill himself but is prevented from doing so by his mother; he repeats his vow to kill Tolomeos.

Act 3
Furious at Tolomeos for being ungrateful to him despite his loyalty, Achilla plans to defect to Cleopatra’s side, but Tolomeos stabs him before he does. As battle rings out between Tolomeos’ and Cleopatra’s armies, Tolomeos celebrates his apparent victory against Cleopatra. Cleopatra laments losing both the battle and Caesar. However, Caesar is not dead: he survived his leap and is roaming the desert in search of his troops. While looking for Tolomeos, Sesto finds the wounded, nearly dead Achilla, who hands Sesto a seal authorizing him to command his armies. Caesar appears and demands the seal, promising that he will either save both Cornelia and Cleopatra or die. With Caesar alive and Achilla dead, Sesto’s spirits lift, and he vows to fight on. Caesar continues on to the Egyptian camp, where a lamenting Cleopatra is overjoyed to see him.


In the palace, Sesto finds Tolomeos trying to rape Cornelia and kills him. Having successfully avenged Pompey, Cornelia and Sesto celebrate Tolomeos’ death. The victorious Caesar and Cleopatra enter Alexandria, and Caesar proclaims Cleopatra to be queen of Egypt and promises his support to her and her country. They declare their love for each other. Caesar then proclaims Egypt’s liberation from tyranny, and wishes for the glory of Rome to spread far and wide. For the final chorus, the entire cast (including the dead Achilla and Tolomeos) gathers on stage to celebrate the power of love and the triumph of good over evil.

Posted by Peter McKenzie-Brown at 10:50 am