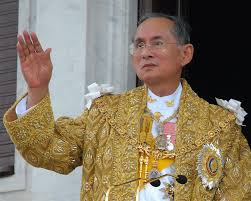 In 2004, my wife and I decided to spend a year in Thailand – a year that slowly turned into four. As we learned, the dominant meme in Thai culture is that, whatever happened, the Thai would smile. This turned out to be true, but over the four-year period we lived there – in the lovely northern city of Chiang Mai – we gradually learned that the Thais have a smile for every known human emotion. The country enjoys the moniker, the “Land of Smiles.”

We created new lives for ourselves there. We took an intensive, six-month course in Thai, and I began teaching at Chiang Mai University, developing a course for foreigners who had come to Thailand to teach English. My course book is still available online and used by many people in many countries. Soon after we arrived, the Boxing Day tsunami killed nearly a quarter million people in 14 countries.

We studied Thai culture and language, and Bernie became involved in charitable organizations – first with local people who had suffered from leprosy; later, with a Dutch charity directed at the country’s desperately poor Hill Tribe people. These people, whose lives were restricted to the tops of mountains, were deprived of the fertile lands in the valleys and often of Thai citizenship. Hundreds of thousands are among our planet’s stateless peoples.

We travelled a lot. I, for one, became immersed in the country’s history and religion – nominally Buddhist, but with trappings of Hinduism and ancestor worship. There was deep reverence for King Bhumibol. He was the ninth monarch of Thailand from his dynasty, which dates back to 1782. Born in 1927, he was already elderly. I couldn’t imagine how the country would respond when he died.

Each morning we woke up to BBC World News, which kept us informed about the world outside Thailand. But on the morning of September 19, 2006 that changed. Instead of comforting news from the Beeb, we woke up to martial music. As I drove to work that morning, I encountered military vehicles everywhere. Overnight, there had been a coup d’état. I remember saying to Bernie, “It’s time to go back. We’re Canadians. We don’t do coups.” A container ship took our belongings, and we returned home.

The Thais restored democracy for a while, until another general took over in 2014. It was the country’s twelfth coup since becoming a constitutional monarchy 86 years ago.

~~~~~
Fast forward a decade. The King died in 2016, and the country mourned for more than a year. Recently a priest we knew in Chiang Mai – Bernie went to mass at his church – sent a commentary to friends and former parishioners that “many continue to wear black,” or have black ribbons sewn onto their clothing, to honour the year of mourning “for the passing of the well-revered, and genuinely loved, late king.” Although he was not crowned until after the mourning period, the thrice-married (and, when we were there, unpopular) new king’s reign was back-dated to the death of his father.

Then Father David Townsend’s message becomes ominous. “Politically, Thailand remains in the grip of the army generals who removed the last democratically elected government. Groups of more than five persons meeting publicly are banned. Some well-respected scholars who were hosting an international academic gathering here in Chiang Mai University have been arrested,” he said about a country I once loved.

“There is great use of the lèse-majesté law, computer laws and defamation laws, against opponents. Whistle-blowers, social activists, and workers detailing the truth regarding abuse of workers’ rights and such like, even BBC news reporters, can be ensnared by defamation suits.” Dissidents are being “called into army barracks for extended ‘conversations’ to encourage ‘attitude adjustment,’” he said.

~~~~~
The deposed former Prime Minister, Yingluck Shinawatra, warned that the criminal negligence case against her would make future leaders rethink any policy to help Thailand’s citizens. In court for alleged mismanagement over her government’s rice pledging scheme, she gave a rather confusing defense. “No public policy benefits you financially,” she said. “If you measured public policy only by financial benefits, no government would want to make the decision.” She came from a wealthy family and her brother, Thaksin, served as PM while we were there.

When Thai general Prayuth Chan Ocha staged his coup against her four years ago, it followed six months of street protests against her fairly elected government. After the military took power, they charged her with dereliction of duty.

The charges related to her oversight of a political episode called the “rice pledging scheme.” The idea ran aground in early 2014, after three years of accumulating from the country’s many peasant farmers an inventory of more than 17 million tonnes of rice. This angered the middle class in Bangkok, Southeast Asia’s economic colossus. The bourgeoisie felt taxes were going into “populist” schemes laden with corruption.

Four years after the coup, says the headline in a Singapore-based newspaper, “Thais tire of corruption and democratic delays.” The good news, if there is any, is that popular dissent has begun. For example, a few months ago the people of the northern city of Chiang Mai openly protested the building of a government luxury housing project on forested land outside the city. This was the largest gathering since the junta took control.

The military are also being investigated by the country's anti-graft agency over a suspected misappropriation of some C$512 million from a state fund for the poor. The government, most Thais believe, is wide open to corruption and the haemorrhage of state funds into military hands. The former government minister in charge of a major aspect of the scheme received a 42-year custodial sentence. Prime Minister General Prayuth has said to expect an election in about a year’s time. Presumably activity by approved political parties will be allowed beforehand. Drafted by military minds, the new constitution will no doubt give the armed forces continuing political power.

~~~~~
After reading Father Townsend’s epistle, I got in touch with three friends who had married Thai women and wanted to raise their kids in that country. Two refused to discuss the situation, because living in a country operated by a military with a good intelligence system carries risks. The third – let’s call him Dave – formally responded, but in ways that made the impact of military rule clear. At best, his comments were cautious; at worst, designing.

“My wife and I and our family are pretty happy too. We are not rich, but I work and we make enough money,” he writes. “I’m sending my daughter to university now, for example. I guess we would be considered middle class by most standards.” In comparison to the days before the latest coup, he suggested, “the current situation is a gift. I love Thailand, and my Thai family and friends. The people I love best in the world, outside of my American family, are all here. Yet this stability comes with high prices – notably repression and oppression. People are not allowed to talk about the government. People are not allowed to demand change.”

He says Thais admire justice and free speech “in the abstract,” but “in the real world in Thailand, they are secondary considerations at best.” Thais can be jailed for making comments on social media about the government or monarchy. “I would certainly never do it, and if any of my Thai friends did something like that I might never see them again.” The mood is resigned but waiting for change: “Since people are not permitted to act or speak their minds, or demonstrate in public, they cling to old and moldy beliefs. No one will make the change themselves because they think the cost is too high.”

“And they are right.”

Posted by Peter McKenzie-Brown at 9:50 am